Bhutan is a country in the foothills of the Himalayas, remote enough that it was never colonized.

It is a Buddhist monarchy. The country is ruled by a 29 year old king and the head of the monks, both with equal powers. 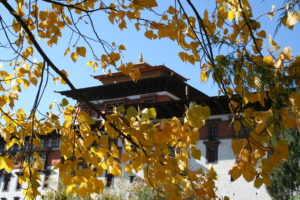 The country is almost all mountains and forests, while 70% of the population are farmers.

There is a main road going from one side of the country to the other, permanently under construction. It has an average of 17 curves per km.

80.000 Indian workers were hired to do the construction work for Bhutanese roads, as its own population is too busy farming, they say.

Bhutan exports 80% of its electricity production to India. In return India protects the country from the evil communist threat in the region.

They worship the reincarnation of Buddha, Guru Rimponche, who was born out of a lotus flower and visited Bhutan converting Animists, Boens and Hindus.

Bhutan is the only country in the world where the Takin can be seen. It’s a unique animal, a mix of cow and goat.

National dish is called ema datsi, a very hot stew made of chilis and cheese.

One of the most remarkable holy figures that people in Bhutan worship is a madman called Drukpa Kunley. Alcoholic and promiscuous, people offer him wine in the monastery. He subdued daemons with his penis, so a wooden phallus is a national symbol for protection against evil and as an icon for fertility. 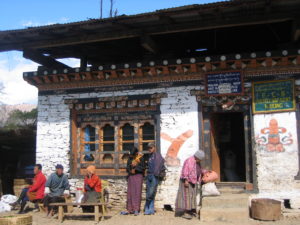 The former king abdicated last year, probably to be able to dedicate more time to his 4 wives, all of them sisters.

It is a country where polygamy is natural and accepted (also between monks), although sexual education is poor.

There is a dress code for men: the gho, something like a kimono, made of one long piece of fine garment, wrapped around the waist. It has a big kangoroo-like pocket where people store all kinds of things.

In the 60’s the country still resembled a middle age society and it was only then when it started to open slowly to the world.

Archery and Kuru (darts) are the national sports. 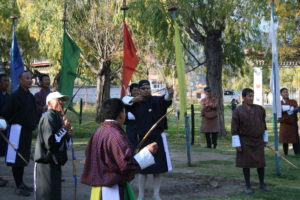 There is a government policy of gross national happiness, trying to measure the progress of the country in terms of the happiness of its citizens.

Bhutanese adore their king and the head of the monks. However:
– The king banned wrestling channels on tv, as soon as he realized its citizens started to like wrestling.
– Men have to wear gho during business hours and cannot wear tights underneath until the head of the monks moves to its winter residency. When we were there, temperatures were already cold and the head of the monks hadn’t decided to move yet 🙂
– There was one traffic light in the center of its capital, but the king didn’t like it and they replaced it back to the human version of it.

They religion prohibits them to kill, even a fly. They have pristine rivers, but they cannot fish. If they cannot convince an Indian to fish from their rivers for them, they’ll import it. They eat beef, but it comes from holy Indian cows, slaughtered also by Indians, in or outside their country.

Bhutan is the perfect place for the octogenarian American tourist. Tourism is very regulated so tourists are escorted throughout the country, aseptically preserved in high class hotels, conditioned cars and buffet&souvenir restaurants. This way they don’t pollute the country with their influence, and in return they get out of the country as clean as if they were coming out of an spotless marble floor museum.

One thought on “The Kingdom of Bhutan: All you ever wanted to know and were afraid to ask”