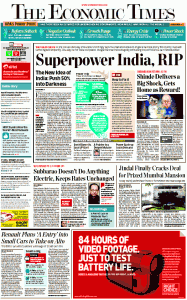 Superpower India RIP. That was the frontpage of the economic times last week, but that may as well have been called ‘when the shit hits the fan’.
The Indian tiger sometimes seems like a clumsy cat as India’s problems come one after another.

2012. 680 million people in India lose power in two consecutive blackouts, the government loses face giving a promotion to the power ministry and issuing laws that they recall a few days later. But there is more: Industrial production slows down, monsoons start to get erratic, projects get delayed, corruption is still rampant and people lose faith in their country.
It must be hard to rule a country of more than 1.2 billion people, many of which are living below the poverty line. However, it seems like little heart has been put in the recent years to achieve the dream many already took for granted: Superpower India.

Apart from a fundamental problem of infrastructures, what always strikes me about the country is the generalized obsession for bureaucracy. Bureaucracy is there to fill in the time of many individuals who wouldn’t have a job otherwise. I like to see this level of bureaucracy as a good rough indicator of how well a country is doing. But no big change so far in India in this front, low value employment still lingers everywhere, and at first sight, things seem far from efficient and a huge amount of man hours could be allocated for a better purpose.
Politicians and citizens should really try harder to change the direction they are going. India needs to reinvent itself to succeed, do some healthy process re engineering and realize that some of the things they have always done the same way may have to be redefined.

India is a victim of its own idiosyncrasy. No one but India itself is to blame for current Indian problems.
Not the bureaucracy, or the corruption, or the lack of power.

Not even the lack of rain: Using cow dung as fuel creates biomass that adds to the coal dust in the air. That affects the monsoon and brings a catastrophic drought. That not only affects the holy cows survival but also the survival of many of those Indians living below poverty line, waiting for a miracle to come from the sky. As they wait, they keep busy relentlessly burning more and more cow dung, without knowing that they are maybe burning their chances to become a world super power.

Reference: The Economist: Monsoon, or later.